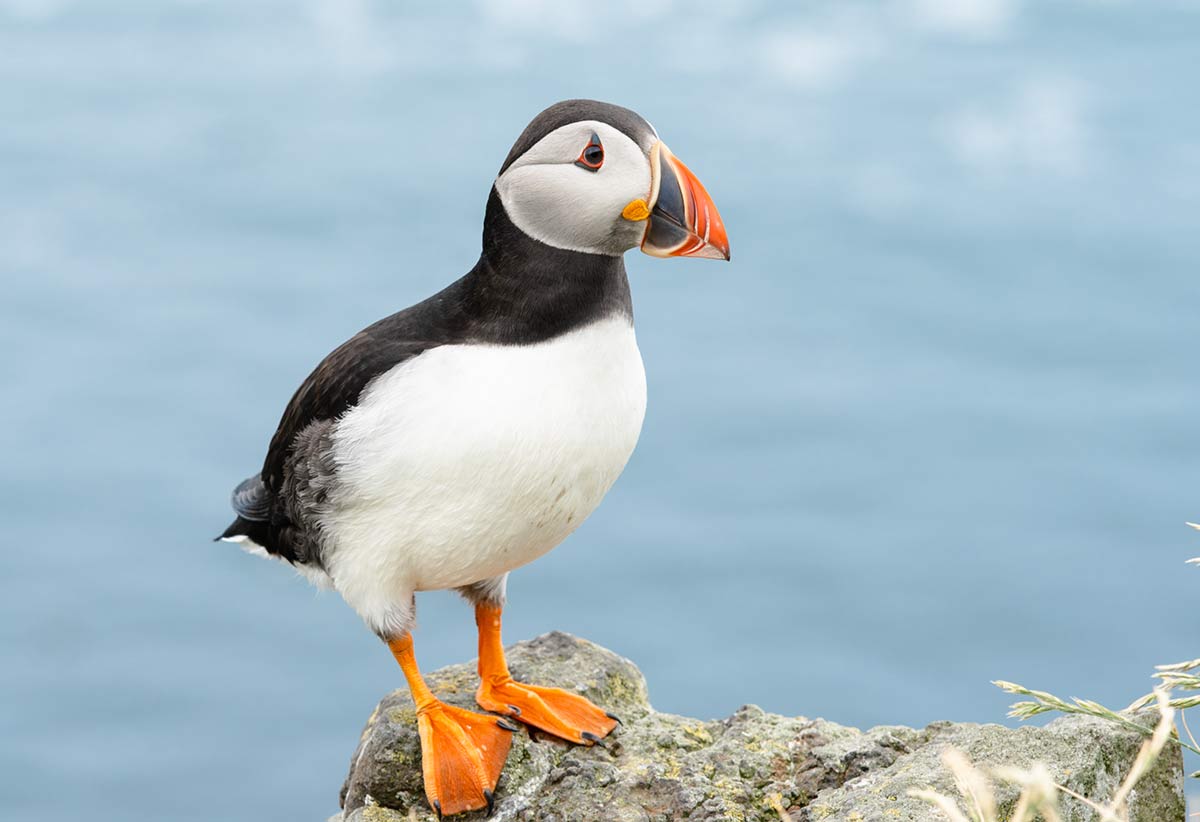 Confession time: I love puffins! The way they look at you so innocently with those big pretty eyes, their clumsiness, the fact they have no fear of people, I just love them! So when I discovered that Puffin Island in Scotland was not only a real place but also pretty accessible from the Isle of Mull, I simply had to go. The island is officially called Lunga, part of the Treshnish Isles, and a number of companies do day trips there and to neighbouring Staffa Island. I did mine with Staffa Tours.

I got the boat from Kilchoan, on mainland Scotland about 7 miles away from Tobermory in Mull. From here it takes an hour or so to get to Lunga. Just 15 minutes into our journey we were lucky enough to have some dolphins join us. I just managed to grab a fairly clear shot of them playing in the wake. 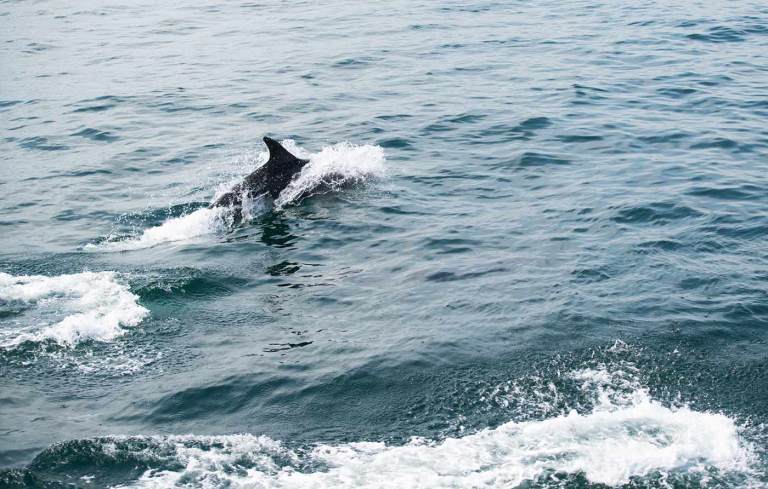 The clouds rolled in as we made our way further out into the ocean, but luckily the rain held off. As we drew closer to the Treshnish Isles huge groups of seabirds were swimming and flying around, including razorbills, gulls, comorants and… puffins!

We soon reached the tip of Lunga, a modest rocky beach, where we got off. It’s a bit precarious; I almost slipped over on my first few steps of dry land, d’oh! I blame it being too keen to see the puffins.

A short five or ten minute walk up the nearest hill and you’re in puffin territory already. They’re not in huge numbers here but they spread out across the whole length of the cliff. I’m pretty sure I squealed when I saw the first one. 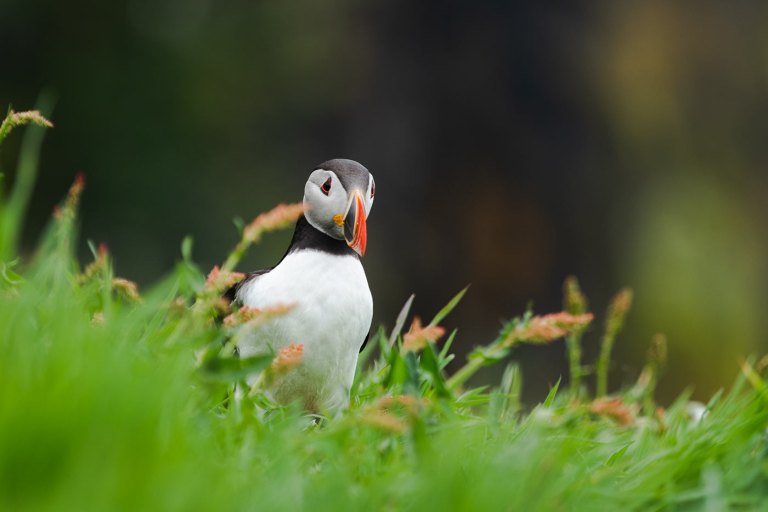 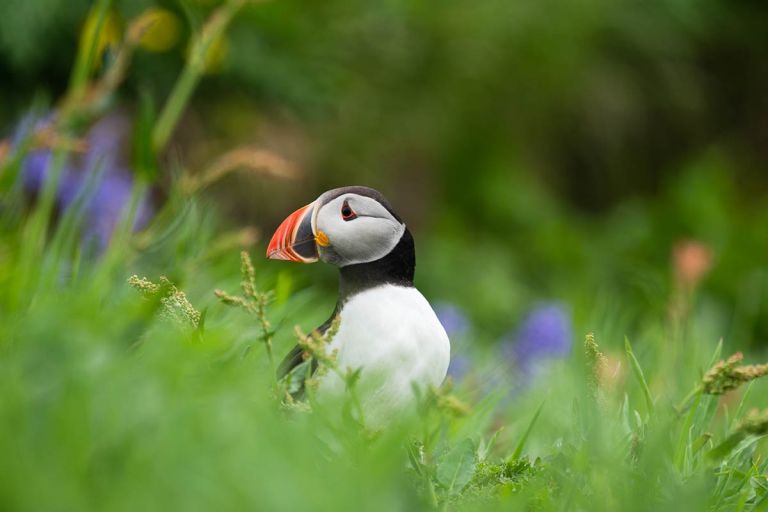 I really could have spent the whole time just in this first spot, but I was curious to follow the path that continued along the edge of the cliff and see what else there was.

… Even more puffins! With more dramatic cliff edges and a few razorbills and cormorants thrown in for good measure. It was stunning. 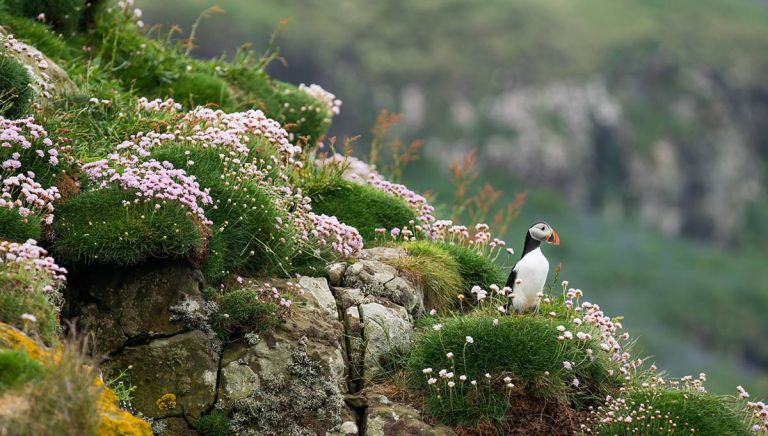 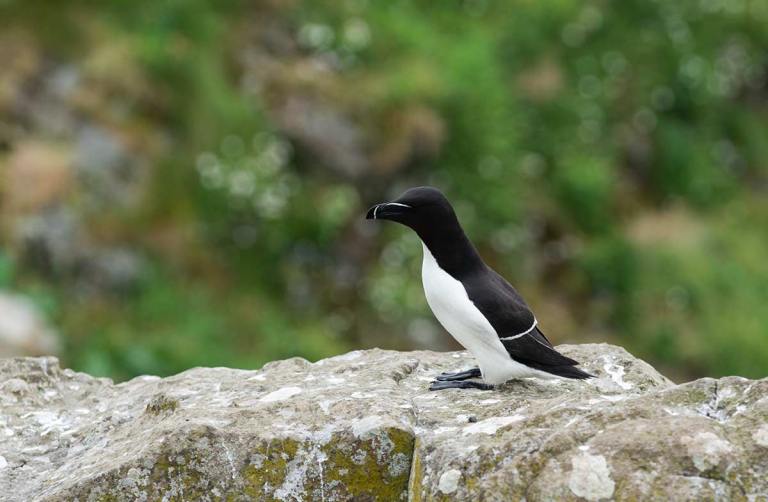 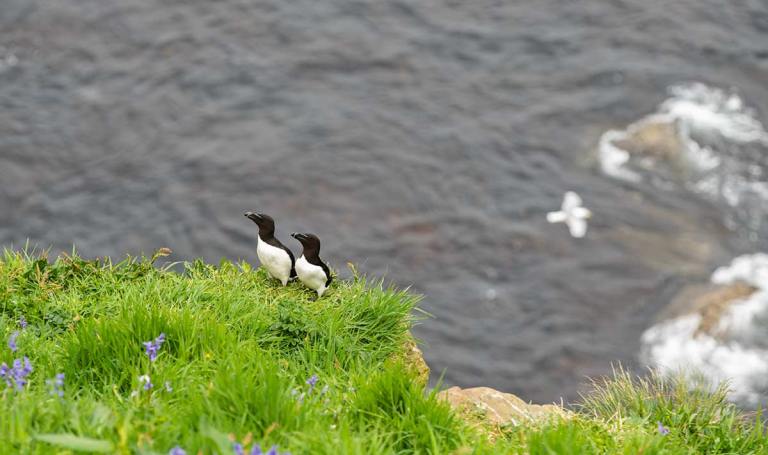 And then, another 10-15 minutes or so down the path (hard to know exactly how long because I kept on stopping every ten seconds to photograph every puffin I saw) is a HUGE colony of guillemots. There must be thousands of them there, and the noise! I felt like I was in the middle of a David Attenborough documentary. 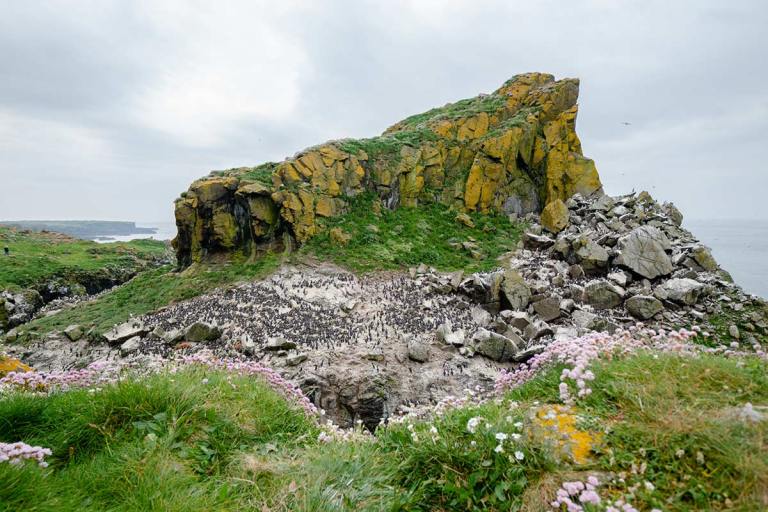 It was definitely worth leaving the first little section of cliff to see them. The path continued further still, but by this point I had around half an hour left before I had to be back at the boat, so decided against it (we had two hours there in total).

After a while I reluctantly headed back to the boat, but still got distracted every ten seconds by these adorable guys. 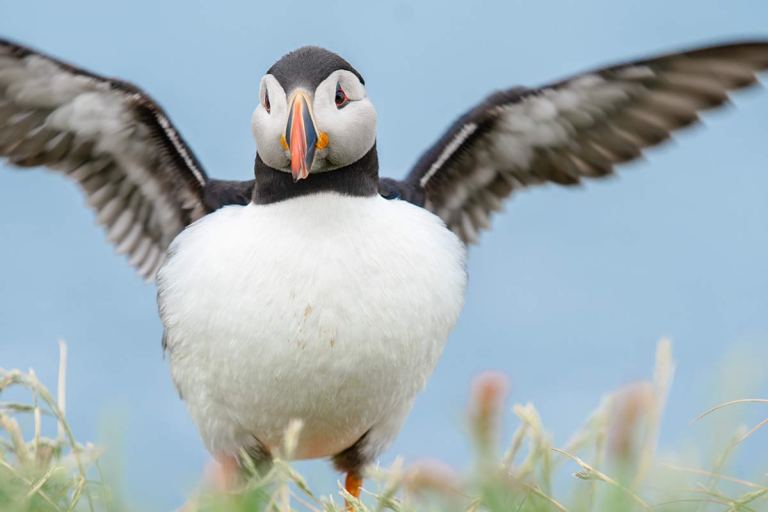 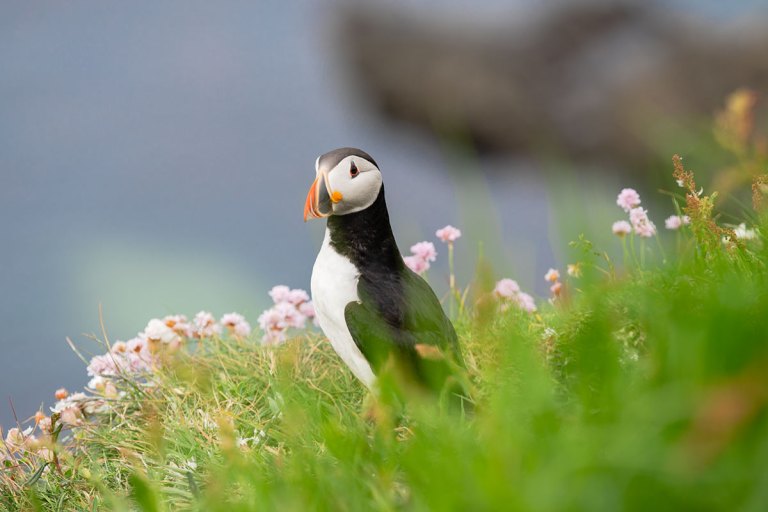 Trip to Staffa and Fingal’s cave

And the day didn’t end there; we still had a short trip to the island of Staffa left to do. This famous island is a mini version of the Giant’s Causeway in Northern Ireland and was created by the same natural processes. In some ways it’s more epic – a small island in the middle of the ocean with a gaping cave in the middle, called Fingal’s Cave. 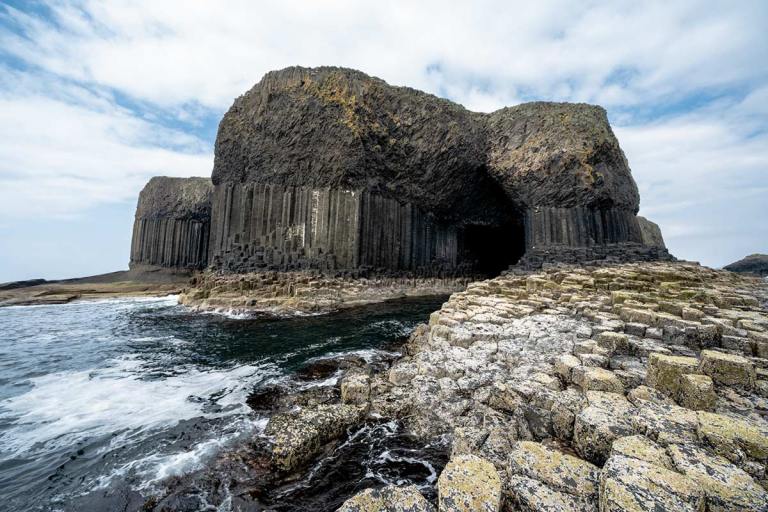 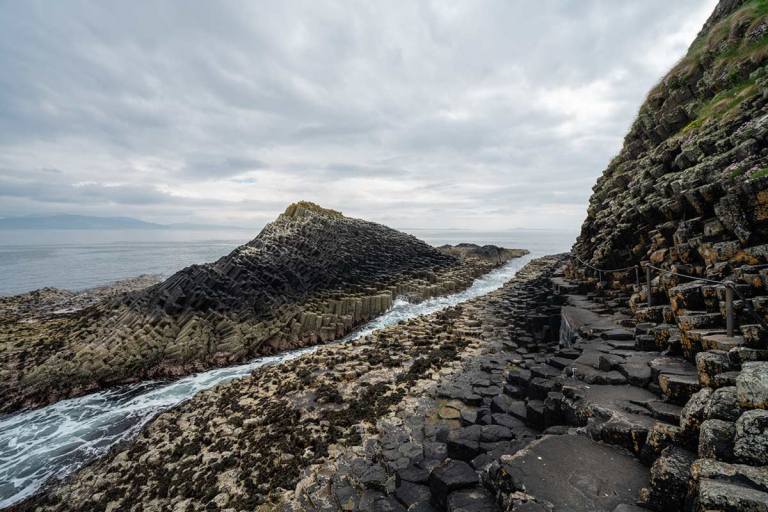 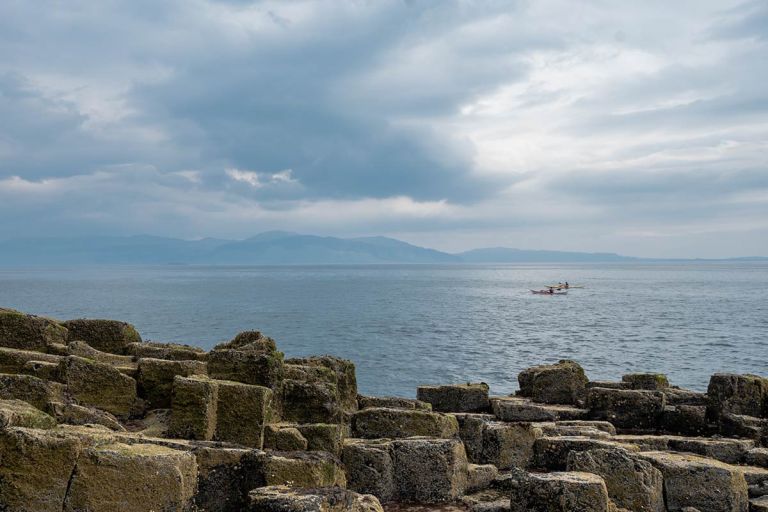 There’s a little jetty here which makes getting on and off the boat easy – so long as the sea is calm!

I had the cave to myself when the other tourists left to explore the rest of the island. It meant I didn’t get to see much else of Staffa (we only had an hour there) but I wasn’t bothered – the cave is definitely the best bit, I’m reliably informed. Unfortunately we weren’t allowed to go inside the cave properly, though, due to some damage that had happened over winter. It didn’t stop the kayakers, though… 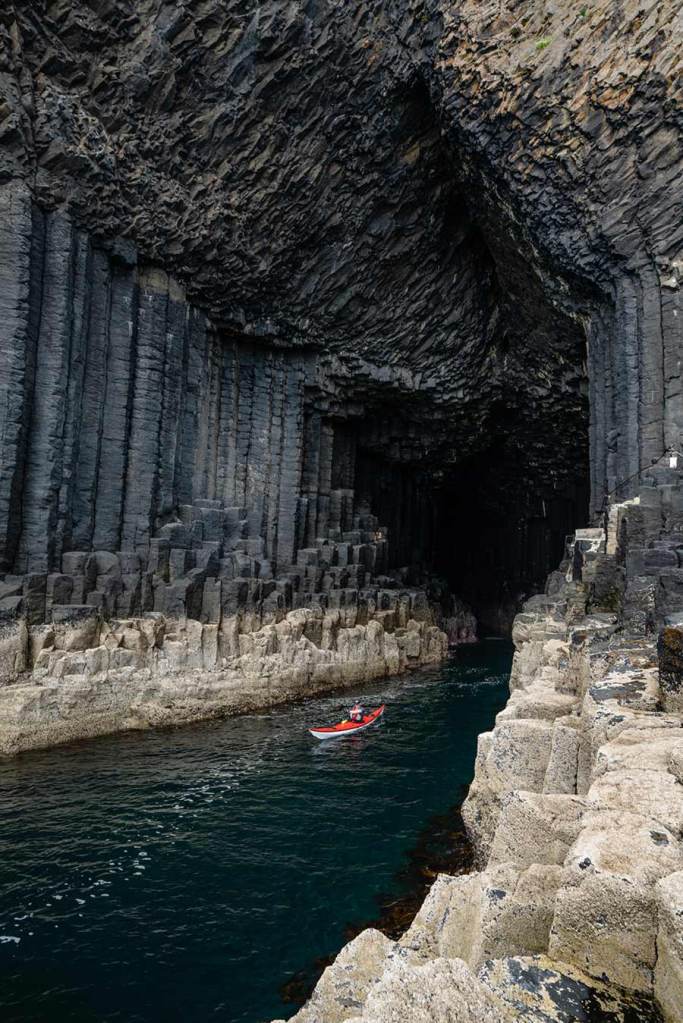 And soon after it was time to head back. We were joined by some porpoises this time, who managed to evade my camera completely and I ended up with some very blurry shots of the rails of the boat and some splashes of water. Definitely not one of my finest photography moments! 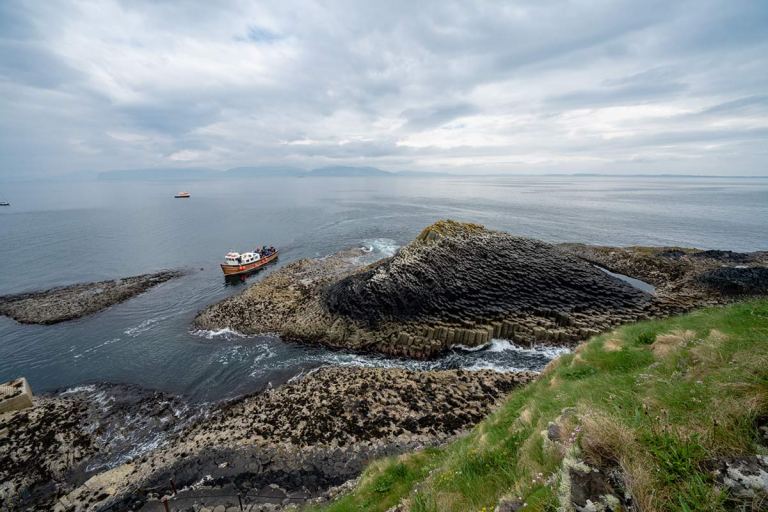 Boat tour to Staffa and Puffin Island: the verdict

The tour was a not-so-cheap £65 but absolutely worth it; I had an amazing time and couldn’t believe how much wildlife I got to see. Lunga is simply a magical island, and Staffa isn’t far behind. The guys that run Staffa Tours are very friendly and know their stuff about wildlife, too. They were happy to stop the boat and watch any wildlife we saw on the way. I just wish I could have stayed longer…

If you’ve got the time and money I think it’s a good idea to leave from Tobermory, Kilchoan, or even Oban, as it gives you more time on the water and therefore more of a chance to see other types of wildlife. We saw dolphins, porpoises and even stopped off at sea eagle’s nest on the way back. Sadly no whales or basking sharks but hey, you can’t have everything!

Note: Puffins only spend the summer on the Treshnish Isles, typically from May-early August.

The best place to see puffins?

Whilst visiting Staffa and Lunga was amazing, my very favourite place to see puffins is still Mykines in the Faroe Islands. There are even more puffins here (though it’s harder to see other bird species), and not only is the boat journey absolutely beautiful but the Mykines is also home to one of the most stunning lighthouses I’ve ever seen. You can stay all day here, or even the night, meaning you get to spend loads of time hanging out with puffins as well. Check out my post on meeting puffins in Mykines to find out more.